The energy market is evolving. It is evident that Canada and other markets are moving towards more renewable forms of energy. Some wonder why the transition does not occur faster. One common opinion is that oil and gas is too profitable and is suppressing the ability for renewables to advance. While this is true, there are other reasons renewables are slow to dominate energy generation in Canada.

The Current Energy Situation in Ontario

Early solar programs created by the Ontario government set solar power payback very high, but as the cost of solar has reduced it becomes increasingly financially viable. The original programs in 2006 and 2009 had a solar energy buy price of 40 to 80 cents per KWh (Kilowatt Hour), which created a public image of solar power as high cost energy, which helped delay the wave of solar energy that was coming because of falling prices [1]. Later, most solar projects were much more reasonable, such as 2016, where the price per KWh was 15.67 cents [1]. Currently, the majority of Ontario’s energy comes from nuclear plants. With the Pickering Nuclear Generating Plant shutting down in 2024 there will be room for new energy projects, but it is unclear whether it will be a renewable source[2]. Currently the Pickering plant produces about 15% of Ontario’s energy.

Other provinces are working to clean up their energy production by replacing coal plants by natural gas, which has low carbon emissions for a hydrocarbon source, but is still a major carbon producer compared to renewables, or the nuclear energy it would replace in Pickering. Solar irradiance, which is essentially the power of the sun, is very low in most parts of Canada compared to the majority of the world. The low solar irradiance, visible in the image below, does not allow Canada to efficiently use out of solar power no matter how economical it becomes.

Energy in the Prairies

Alberta and Saskatchewan are steadfast in their production of oil, and recently, natural gas fracking as well. Both provinces are in the process of switching from coal plants to natural gas production and are looking for other sources to eliminate coal. Canada as a whole, but particularly the west, are economically based around oil sands and other industries that support oil [5]. Most of the apprehension to making switch to exclusive renewables comes from the west, because of their extensive economic dependency on oil production. Subsequently, political and environmental topics are divided greatly between the east and west of Canada. Despite the keystone oil sector, Alberta is considering nuclear to be their primary green energy. With the development of small modular nuclear reactors that can be less than the size of a shipping container, the Alberta Government is hoping for dispersed nuclear reactors to be a way to reduce carbon emissions.

The photo above provides a breakdown of where Canada’s oil and gas jobs are. The opposition to renewable energy stems from Alberta because it means debilitating the current industry that employs over three hundred thousand people in the province.

Wind, solar, and tidal power are primary sources of renewable power in Canada. The power generated from these sources is variable. Solar Power is becoming increasingly cheaper per kilo-watt hour (KWh) and is a reasonable source of renewable energy for Canada. Canada is trying to move its energy sector towards the target Canada set out for 2030 to reduce emission by 30%  in the Paris Agreement. (The Paris Agreement is a signed document by 175 to reduce greenhouse emissions and create a better future for the planet) [8].

Despite its merits, solar power efficiency greatly varies based on the time of day, time of year and the weather conditions. Solar energy production can be modelled for its expected output. On the graph below, the solar output is compared to the energy demand. The peak demand happens after the peak of solar energy. This results in a need for another mode of producing energy to meet the demand.

Wind power is a current source of renewable energy in Canada as well. Unlike solar energy, the peak energy production hours typically overlap with peak demand. Canada has the necessary amount of land to use for wind farms. However, wind is just as unpredictable as sun, and relying on wind for a substantial portion of the provincial load could lead to energy shortages. Occasionally, large windstorms cause the turbines to produce too much power, resulting in an overloaded grid. The grid then needs to be shut down until the storm is over [8].

Renewable prices per KWh are comparable to those of oil and gas. However, the cost of producing renewables is declining leaving them with more potential to be lucrative. The issues with renewable sources is the cost being almost all upfront capital cost, in the purchase and installation, that a company has to put out. In oil and gas, much of the cost occurs during the operation and maintenance of the plants.

Consider constructing a solar farm with millions in investment dollars. The electricity will be sold to the provincial utility distributor for 20 cents per KWh over the next 20 years. The overall profit of 2 cents per KWh.

3 years later, the price drop in solar materials has allowed another company to create a project in which the electricity is sold for 18 cents per KW.  Now they are making a 5-cent profit. They also likely did not need as much upfront investment money. Constant refining of renewable energy sources makes investors more likely to wait for a more profitable opportunity. [6] 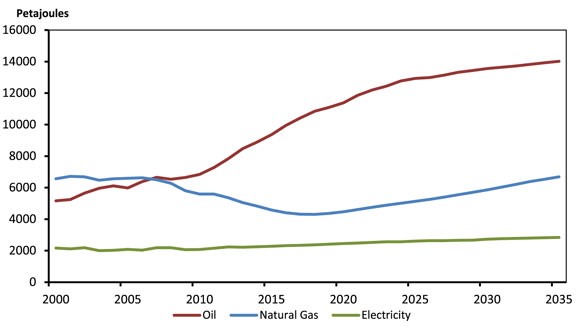 The graph above shows how Canada’s energy consumption is expected to grow relatively slowly. Until old power plants begin shutting down, such as the Pickering Nuclear Plant in Ontario, large scale renewables will not begin to replace oil and gas.

How Future Technologies could bring an even greater rise to renewables

Some current issues with renewable energy can be improved with future technologies. The issue of power stability and the inability to control renewable energy production can be solved with a better energy storage ability. Currently battery storage is used during peak times for large energy consumers to reduce the demand. This makes it easier for the grid production to avoid needing high energy production for short amounts of time, or the possible result of a brownout [8]. A brownout is where there is more energy being consumed by the grid than is being produced, causing the energy utilities to do temporary shutdowns in rotating areas, which costs businesses millions of dollars each year just for losing power for a short amount of time [9].

For renewables to be a main source of power there will need to be large energy storage to account for the peak times of day to help stabilize daytime energy consumption. There are many technological advancements now in areas such as chemical storage, hydro storage, and compressed air storage. Once the technology is efficient enough to make renewables more viable then with the decreasing prices it will become a simple choice to change fossil fuel sources into renewables.

[8]G. Bakke, The Grid: The Fraying Wires Between Americans and Our Energy Future. Bloomsbury USA, 2016.[Text]

[9]“What’s the Difference Between a Blackout and a Brownout?” [Online]. Available: https://www.directenergy.com/learning-center/difference-between-blackout-brownout.&nbsp;